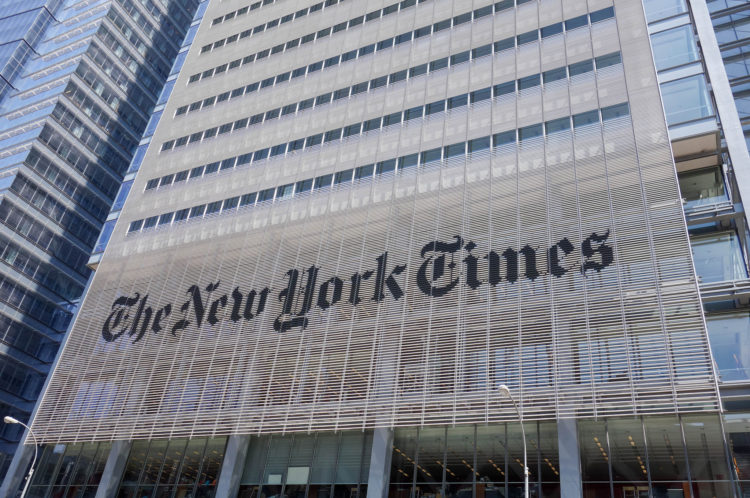 I went through the NY Times 19 claims of fact checks on President Trump’s letter to Congresswoman Nancy Pelosi regarding impeachment, and 16 of them are utterly bogus, and the three that remain are minor at best. 16-3 That’s 16, SIXTEEN errors in their own fact check. They had 3 right, and none of those was substantive. NY Times – this is sad, so sad for what I once relied on to be the standard in journalism- what a joke. Read on if you want the play by play.

1. “This impeachment represents an unprecedented and unconstitutional abuse”

It’s true the Constitution gives the House “sole power” to impeach officials, including the president, BUT IT REQUIRES high crimes and misdemeanors, not their own dislike for Trump. And whatever those non-crimes are you still have to PROVE them. Else he’s right, and he has a right to call it unconstitutional.

2.  The articles of impeachment include no crimes. The NY Times notes they don’t have to. They do however have to contain high crimes and misdemeanors. Whatever you’re charging him with you have to show that he did – not just wish, believe, or hope.

3. The NY Times has trouble with Trump claiming that the transcript was immediately released. As soon as it was an issue he released it promptly, shocking many. Again The NY Times has a fake fact check.

4. NYT claims that Biden’s actions were in line with US policy – completely leaving out his son’s windfall and involvement with Burisma, the company being investigated. I’m pretty sure the details of his son’s involvement matter.

5. “Even Biden admitted just days ago in an interview with NPR that it “looked bad.”” – NY Times said Biden was paraphrasing his son’s statements. Let’s check.

From the interview with NPR:

“And the fact of the matter is, my son testified and did an interview saying if he, looking back on it, made a mistake, he made a mistake although he did nothing wrong. The appearance looked bad and it gave folks like Rudy Giuliani an excuse to come up with a Trumpian kind of defense, why they were violating the Constitution. His, his words speak for themselves.”

In the above statement – it’s clear that Joe is commenting on his son’s testimony but the NY Times is assuming he’s still paraphrasing. – and issues the facts check. That’s convenient.

6. NY Times takes issue with Trump’s claim that “President Zelensky has repeatedly declared that I did nothing wrong” and mentions that Zelensky criticized Trump’s comments. In their own referenced article – it states that Zelenski criticized the delay of aid. Of course, he wanted the aid as fast as he could. The issue is in regard to the President’s alleged crimes and abuses. Z’s other comments are unrelated to this matter. This is still a 100% true statement. NY Times gets 4 Pinnochio’s here.

7. NY Times takes issue with the infamous Sondland testimony “No quid pro quo. I want nothing. I want nothing. I want President Zelensky to do the right thing, do what he ran on.” – NY Times claims this is a selective quote. First of all, all quotes are selective quotes, so that’s a garbage statement. The NY Times went on to want to include that Sondland also said that he “believed” there was quid pro quo. Here’s the difference – the quote is verified to exist and to be factual, and can inform the those looking at the case. Sondland’s feelings or inferences are irrelevant and not factual. The NY Times calls this a fact check – but there’s nothing to fact check, they just don’t like it.

9. NY Times calls foul on Trump claiming that Pelosi admitted her party’s impeachment effort has been going on for two and a half years.  NY Times claims that the reference quote, Pelosi was referring to the Meuller investigation. Sorry – given what we know about the facts and the basis for the investigation, they are clearly one and the same. NY Times just wants to chime in with more wishes. The president’s statement are true here as well.

10. NY Times claims that Trump’s reference to Congressman Adam Schiff cheating and lying up to the present day is exaggerated – while they provide no argument to refute the President’s claims whatsoever. None. No fact to check again. What’s the score like 9 to 1? Thanks for playing.

11. “7 million new jobs” – NY Times calls out that the economy has added 6.6 million jobs since Feb 2017 – and they cite his first full month in office. Well, a) since he took office on Jan 20th, what were the numbers for those days? NY Times didn’t mention. I’ll give them credit here since they are in the gutter so thoroughly – alright the score is 9 to 2.

12. NYT – Found false “; a colossal reduction in illegal border crossings,” – and the NY Times cites  The number of undocumented people apprehended or deemed inadmissible at the southern border was more than 977,000 in the 2019 fiscal year, compared to 553,000 in the 2016 fiscal year. Here’s what they have no numbers on – how many were prevented from crossing? That is different from the number of apprehended. Their own evidence links to the US Customs link that sites apprehensions, not preventions. And that’s key. The inadmissible are those who get turned around at the border. The NY Times provides no factual evidence as to how many were prevented from crossing despite the rise/ tidal wave of increase of immigration. So they can’t refute the president’s claim with fact. 10 to 2.

13. NY Times claims that the investigations only cost 32 million not “45 million” the President claimed. Unfortunately, their cited reference is to their own article, which at this point is showing me their paywall, and I ain’t buying it. However, I can tell you that the 32 million does not include, the secret hearings that took place that at a minimum cost the country 10 million.https://www.foxbusiness.com/politics/trish-regan-cost-of-impeachment They’re leaving out those numbers because we don’t have them yet, but they were surely part of the effort. So if he’s off by 3 million, I’m not calling it a win for NY T. They need to do better homework. 11 to 2.

14. Trump claim’s the Dossier was “illegally” purchased from a foreign spy by Clinton. Basically, the NY Times cites that the purchase was not illegal. I’ll concede this point but it doesn’t dismiss the use of fabrication. And if those who bought it knew it was bogus and sold it as truth were committing fraud – that’s where I and many take issue. 11 to 3.

15. NY Times disagrees that spies were used against his campaign and cites the DOJ IG report. Here’s what they’re forgetting – They don’t use that word. In fact, that word is more colloquial than most implore. It’s clear in the IG report that the FBI agent briefing the President had a dual purpose to inform and gather information, this came out in the Horrowitz testimony on his report. That covert gathering of information in and of itself qualifies as spying – eg the use of spies. NYT is trying to claim some technicality without making a distinction though. Sorry NYT not buying it 12-3.

16. NY Times correctly states that Trump is tougher on Russia is subjective. YUP. That doesn’t make him wrong – but it makes you wrong on a fact-checking quest to add up false numbers to claim that there were 19 falsehoods and misleading statements. So far the score is 13 – 3.

17. Trump claims “I have been denied the most fundamental rights afforded by the Constitution, including the right to present evidence, to have my own counsel present, to confront accusers, and to call and cross-examine witnesses” and the NYTimes takes issue with this to point out – that it’s not required in the house rules. They admit that he wasn’t given his most basic constitutional rights, because the rules don’t require it. This is exactly why he is right to counter with executive privilege, because if we won’t afford him a fair trial, why participate? 14-3

18. NY Times takes issue with Trump describing that this hoax was started with a false report of the phone call that bears no relationship to the phone call actually made. The President is calling it a hoax due to the whistleblower who still witnessed no factual quid pro quo – felt that it was bad. And that’s just for starters. NY Times is trying to position Trump’s use of the word “false report” to mean false testimony. He’s referring to the falseness of the basis for filing the report in the first place. NYT – This isn’t false – this is your feeling, stretching a subjective interpretation and countering a point that you feel the President made, but just once again isn’t there. 15-3.

19. NY Times claims that Trump is exaggerating when he states that “This is nothing more than an illegal, partisan attempted coup that will, based on recent sentiment, badly fail at the voting booth.” -NY Times has to bend over backward to claim that the “suggestion that impeachment is extremely unpopular is not exactly accurate”. NYT go back and read the letter you’re highlighting – the President didn’t say it wasn’t popular. He said it’s an illegal, partisan attempted coup. And the polls clearly show a shift in public opinion in favor of the President. Is that why this process is being so rush – to get it done before people become aware of the facts or lack thereof? The NY Times has nothing on this statement. 16-3.